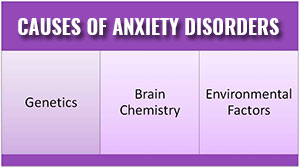 Observing that anxiety disorder is a prevalent problem across the world, one should also be able to realize that the reasons why a person can be impacted by the disorder are plenty as well. Generally, anxiety can be seen as a response to factors from the outside. But a negative outlook of the world can also cause a person to develop anxiety from within. One should also understand that anxiety disorder is an umbrella term referring to plenty of other disorders as well, so causes for each of them may vary. However, some common causes of anxiety can be broadly classified as environmental, medical, drug abuse, genetics and the chemistry of the brain.

The modern lifestyle puts a human in plenty of situations where he or she can become anxious, none more so than at places where a person’s performance is seen to determine the image of that person. None wants to be called incompetent or as a failure and the fear that one might develop a dent in his or her image is the number one cause for anxiety. Work and school are two places where anxiety can develop greatly. And those are places where an individual will have to interact with several other people which can be tough for those with social anxiety, which arises as a result of those individuals being very self-conscious and constantly worrying about being evaluated or judged by others.

Traumatic events in a person’s life can also make that person become very anxious about the world, especially if that person had at some point in his life been impacted by abuse, molestation, victimization or had lost a loved one. Natural disasters can be traumatizing as well and can lead to the development of anxiety. Financial problems, the pressure of running a family, raising kids, maintaining relationships and friendships, can all put tremendous pressure on a person and the fear of losing things of value to them can surely keep them restless and anxious. Oxygen deprivation or reduced oxygen consumption, like in higher altitudes can also be a reason for anxiety.

Anxiety can be as a result of certain other mental or physical illnesses or can be a side effect of medicines given to treat other disorders or diseases. Heart-related problems, breathing disorders, blood-related issues and infections of different kinds can also bring with it anxiety. Emphysema or a blood clot in the lung, are some more examples of medical causes.

Excessive consumption of benzodiazepine medications can cause a person to develop dependence to the medication which in turn can lead to anxiety. Alcohol and drug abuse are also popular reasons for disorders like generalized anxiety disorder and panic disorders. Being intoxicated with Cocaine or amphetamines as well as withdrawal from heroine and certain prescription drugs like barbiturates or Vicodin are also beginning to be understood as reasons for anxiety disorders.

Certain neurotransmitters being in quantities higher than normal in the brain can cause anxiety in individuals, especially generalized anxiety disorder. This happens because of the miscommunications in the internal network of the brain. Studies have shown that genetics is also an important cause for anxiety and a person with number of people with anxiety disorders in their family is likely to have anxiety disorder themselves and some are born with certain genetic predispositions that put them at a greater risk of developing anxiety.

All the articles are medically reviewed by Dr. Carlo Carandand. He has been working as psychiatrist for thr past 21 years. Dr. Carandang has 34 publications and 6 research grants in the areas of anxiety, depression, psychosis, and psychopharmacology. He works as editorial staff for various medical online websites.